This past weekend I took the kids fishing while Libby was working.  We went to Lakeview Park on Austin Lake.  Prior to going, the kids spent a fair amount of time at the compost pile digging for earth worms.  After having collected at least a couple of dozen we went off in search of fish.  Learning from our fishing experience while camping, I also cut up some leftover brats that were on the verge of going bad.

At the beginning, Hayden was more interested in playing on the playground equipment rather than fishing.  Violet jumped right into fishing and put the worm on her hook.  The first cast Violet landed a little blue gill.  After a while Hayden came back to go fishing and soon they were both really into it.  Couldn’t tell if the worms or the brat had more hits, but between the three of us we had over 20 fish.  The kids are looking forward to keeping some next time to take home and eat.

Below is a picture of when both of the kids cast and almost simultaneously both had fish on.  As you can tell from the picture, they are pretty descent size that would be good to fillet. 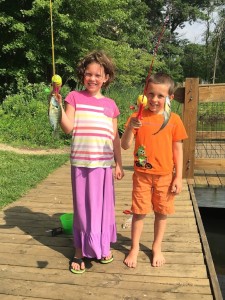