Monday was a very. long. day. It started out like a normal Monday, but by the time evening arrived, it was more trying than most.

Mike picked up the kids from daycare and as soon as the kids walked through the door, Hayden was crying. Not his, ‘I’m hungry and ready for dinner and tired from a long day cry’ but a ‘I’m really hurt and am inconsolable’ kind of cry. After a while, I realized it wasn’t going to slow, so I convinced him to go to the bathroom and mike managed to get him to eat something. His crying slowed as we were able to distract him a little, but resumed back up after not too long back to that VERY LOUD and painful cry.

I called the dr, but ended up taking him to urgent care since our doctors office wasn’t taking any more appointments, and they had no nurses to talk to and out dial in nurses didn’t yet start. 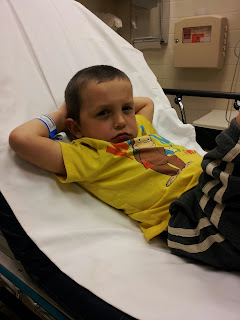 There, Hayden proceeded to cry and after a fairly long (seemed very long) wait,  the doctor there decided that he thought it was intussusception and decided that I needed to take him directly to the ER downtown for an air-enema style X-ray. I was not looking forward to that, but if that is what needed to be done, so be it. This was around 8pm.

We got to the ER, and arrived to a fully packed emergency rooms with no available seats. Luckily, we got in really quick. Hayden was pretty excited to be able to put on a cool gown that was his size.
After we were checked in, things started to slow down. Someone came in and brought Hayden a toy fire truck, crayons and some coloring pages to keep him occupied (thank goodness!). He was seen by a couple nurses and then finally the dr came in. This doctor was not nearly as worried as the other doctor and decided not to do the testing we were sent there for, but to start out with a standard X-ray of his stomach. 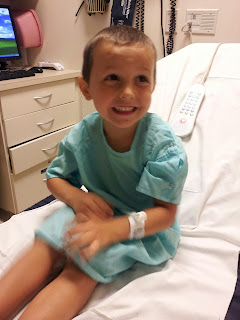 This part was pretty cool, and despite the fact that it was 9pm, Hayden was in good spirits. They brought the X-ray machine to his room! He was able to sit on his bed while they told the pictures and he got to see the pictures right away.
It took probably another forty minutes before the dr came in to let us know that after all of that, Hayden had some blockage at the very top of his intestine and we should give him juice and fruit and more water.
Hayden was still awake after 10pm when we were finally being discharged. He handled it all really we’ll, probably better than I did. It helped that he was given a popsicle and stickers while we were waiting for our paperwork. As we were leaving, the waiting room was still completely filled, and I was so glad to be leaving. 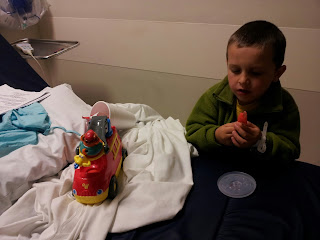 He fell asleep after we were in the car.

I am really glad that it wasn’t anything serious and that no surgery was required, but was really frustrated at the stark difference in the two doctors we saw in both their analysis but also the way they came to their conclusions.
Hayden hasn’t had any issues and is back to his normal self!