Finally, the first real snow of the season! By 6:30am, Hayden was dressed and ready to go outside and play in the snow. Mike was up because today was a “bagel run” day where he goes for a run and stops by the bagel store while he’s out. 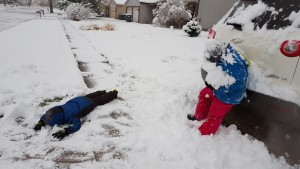 After breakfast, I trekked downstairs to gather up the snow gear and Mike got ready to go to the store. We were surprised by the amount of snow that had already fallen! The kids played for quite a while and then we headed to the library to return books and get warmed up.

The kids have been asking about snow for such a long time. We got back from the library and Mike had a really yummy lunch ready for us – chili with some freshly made beer bread.

We got cleaned up from lunch and the kids worked on making a fort in the living room. They both plan to sleep in there tonight, so we’ll see how that goes. 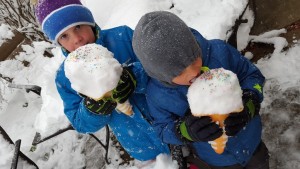 After a while, they got their snow stuff back on and headed outside. Not too long later, I heard a knocking at the back door. Hayden was there, requesting sugar or sprinkles. They had made snow cones using snow and sport cones. I obliged.  Mike and I got on our stuff and headed outside to join them. Mike wasn’t too impressed with the snow cones, but tried one anyway. 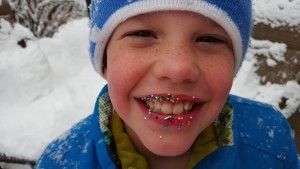 We managed to build a pretty big fort outside and had some fun with a snowball fight.

The snow is still coming down, but we’ve come in and warmed up with some hot cocoa and are drying our clothes by the fire. 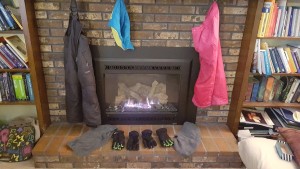 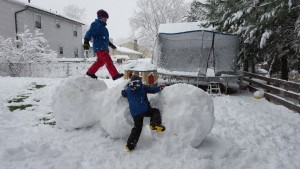