Our journey to Disney World started Saturday morning after breakfast.  We piled in the car and made our way down to Disney World.  On our way to Disney World, we decided to stop in Cave City so we could tour Mammoth Cave.  After driving for a while we got to our hotel and swam in the pool. 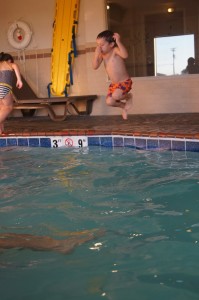 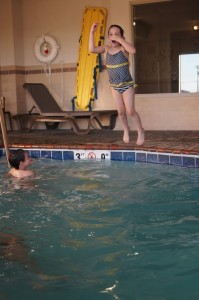 After the best dinner of our trip (it was at a Mexican restaurant; I may be a bit biased) we headed over to the local elementary school to play on the playground.  There was a cool ramp that had hand rails and rollers where you could surf down the ramp.  The kids loved that and the hill that was at the school.  We all rolled down the hill several times.

Sunday morning we made sure to get up nice an early so we could eat breakfast, go swimming, and make it to Mammoth cave before they opened since we didn’t have tickets.  While I waited in line, Libby and the kids walked around and saw turkeys and a foaming mat (more to come on that). In general, the kids liked the tour.  Even when they turned out the lights.  Violet did get a bit nervous when she realized that we were underground because the guide was giving all of his requisite warnings like if you have health issues you will be stuck in the cave until someone gets you out, etc., but she got over it once she saw some of the formations. 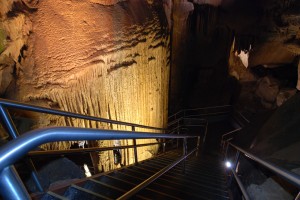 To get in and out of the cave we went through a spinning door so that air flow could be limited since the entrance was man made.  After we got out you could smell that the air was sweeter than in the cave.  Violet said that it smelled like watermelons.

We piled back on the bus and drove back to the headquarters to clean off our shoes.  At the headquarters, they had foaming mats to rid our shoes of the potential for white nose syndrome.  As you can tell from the picture, Hayden made sure his shoes were very clean. 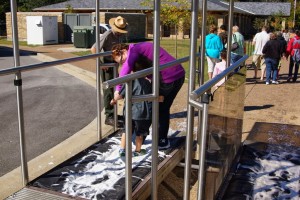 After getting our shoes cleaned, we hopped back in the car to finish our commute to Disney World.  More to come on our first day at Disney in the next post.