Sunday night we stayed a couple of hours outside of Disney World in Gainesville Florida.  After a short drive to Disney World, we checked in at our resort.  When we checked in, the kids got balloons and other goodies to welcome them to Disney. 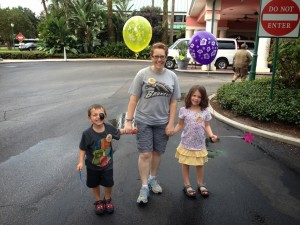 After getting all settled into our room we made our way to Magic Kingdom.  Disney provides bus transportation from the resorts to the parks.  To get to Magic Kingdom, we hopped on one of the buses.  Prior to hopping on however, we had to wait… 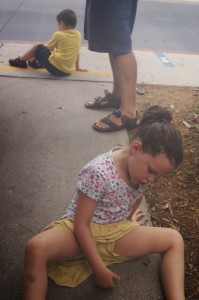 Once our bus arrived, the kids were very excited that they got to sit on a bus that had seats pointing sideways.  This was almost as exciting as the park its self.

Once we got through bag check and the lines to get into the park we started to look and see what we wanted to do.  The first ride we did was the tea cups.  In this ride you can control how fast your cup spins since the rider is the one powering the rotation of the cup.  Libby started off slow, but soon she was prodded by the kids to spin the cup very fast. 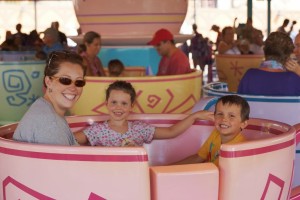 While Libby was riding that ride with the kids, I went to get fast pass tickets for the Winnie the Pooh ride.  In addition to Winnie the Pooh we also saw Mickey’s Philharmagic (a 4D movie experience where there is wind, water, and scents along with a 3D movie), and Ariel’s Journey of the Little Mermaid Ride.  This ride impressed me the most because of the way they loaded the people on the ride.  Instead of stopping the sea shells (we rode in those) they kept moving at the same speed as a conveyor belt that we stood on.

After Ariel’s ride the kids were hungry and thirsty since we didn’t bring any food or water with us to the park.  While I was getting snack (water and popcorn) Libby and the kids watched a clown show that they loved.  In addition to watching the show, we were able to get a ride on Dumbo 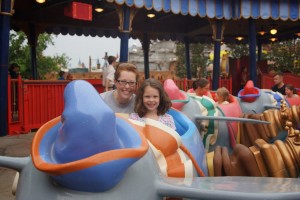 We had to wait a fair bit of time for the Dumbo ride.  There seemed to be a line that was 20-30 people long, but when we got closer we found that the line of people snaked inside to where there was a play place.  We got a pager and had the kids play in the play place while we waited for Dumbo.  While we were waiting an announcer came over the intercom and said that there was a thunderstorm approaching and Dumbo may have to be shut down.  Luckily we were able to get on Dumbo BEFORE the rain started.

Once the rain started it came down hard and for a long time.  We were planning on napping and then going back to Magic Kingdom for dinner but the rain changed our mind.  Instead of going back, we stayed at the resort and swam in the rain.  Around dinner time the rain subsided so we could go swimming in the big pool. 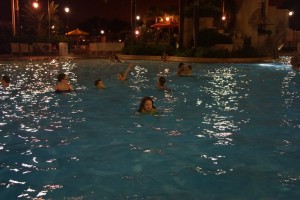 At times the first day was a bit overwhelming due to the size of the park and number of people and the rain in the afternoon was a bit of a disappointment, but we were still able to have a good time in Magic Kingdom in the morning and at the resort in the afternoon.